For those of you who read my website blog regularly, you will know that since my late teens and early twenties, I have been a huge fan of handheld computing.  I have my own personal computer museum in my home office that’s full of handhelds from Psion, of which I owned many when I was younger, and other devices such as a Windows CE palmtop, a Palm OS handheld, and even a couple of Apple Newton computers.

You might be surprised to hear therefore that when the news of the first iPhone broke in 2007 I was disheartened.  This, I knew at the time, was the death knell for my beloved keyboard-based handheld computer that I wrote about in this very blog the other month.  So of course it turned out to be as smartphones, where the keyboards are made in software, are significantly cheaper to manufacture, and have much higher profit margins than anything that had a physical keyboard, where you needed different layouts for each country around the world. 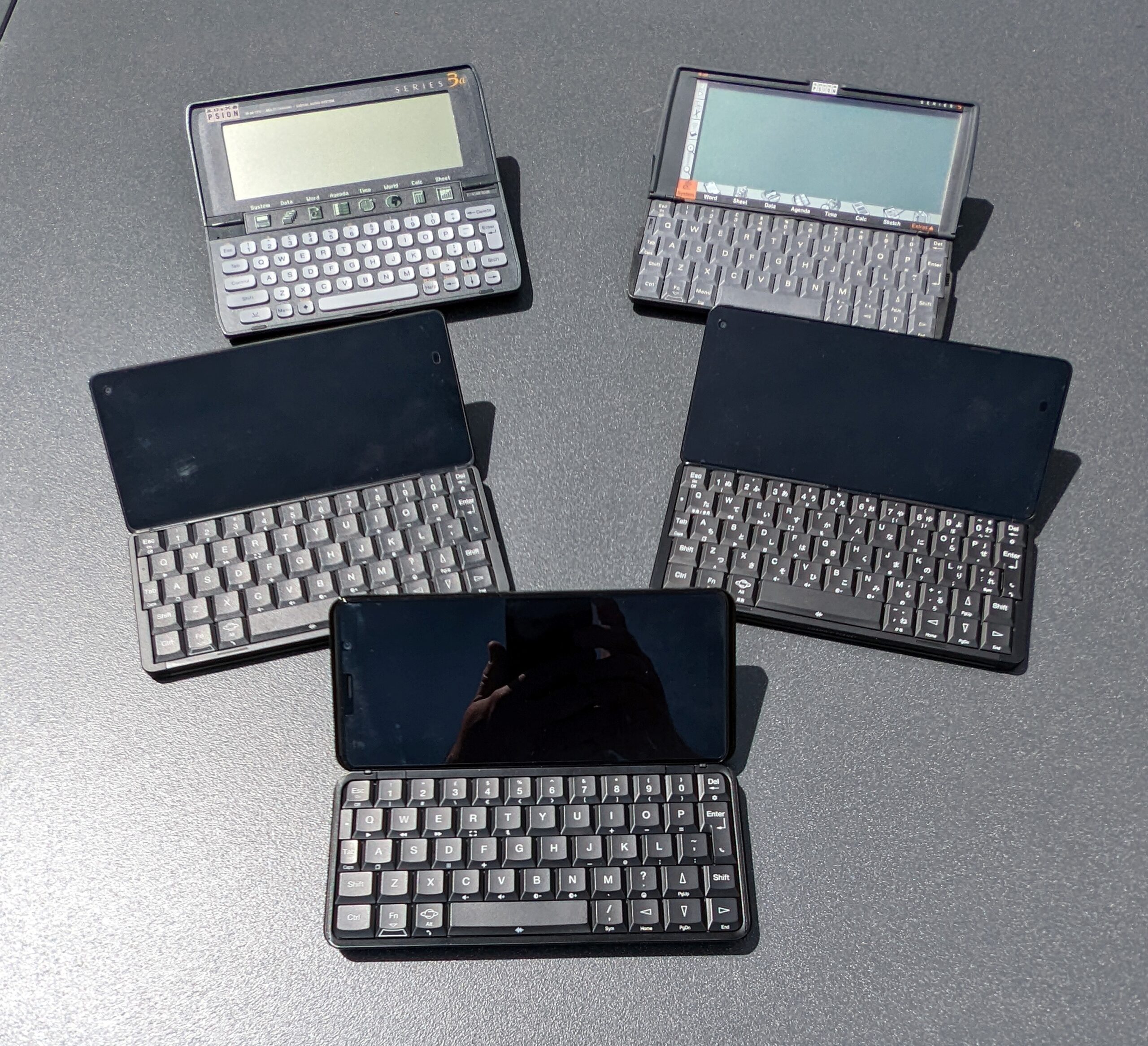 When Planet Computers then announced the Gemini PDA in 2017 I was ecstatic.  Not only would this have a keyboard and body designed by the legendary Martin Riddiford, who I’ve been lucky enough to meet, and who designed the keyboard for the even more legendary Psion Series 5 PDA, but I could finally have the keyboard device I had been missing in my life for the best part of the last fifteen years.

I, like many other people, worried throughout its inception.  Would this device ever come to market and even see the light of day?  Would it live up to the high expectations of its Indiegogo backers?  After it arrived though I used the Gemini very happily day to day as my main and indeed only mobile device at the time. I got so excited about the Gemini in fact that I began regular communications with Planet Computers in London, and was eventually commissioned to write the official user guide for the device.

I was equally excited but equally worried when the Gemini’s successor, the Cosmo Communicator was announced.  It was named in honour of the famous Nokia Communicator series which also sported an external screen.

Then one day, and completely out of the blue, Planet’s CEO, Janko Mrsic-Flogel called me to say they were building the device I had been asking them for.  I was intrigued.  I knew I’d talked to them a lot about future possibilities, but what is it I could have been responsible for?  It turns out that the external flip-up screen I had nagged him so much to create, was on its way. 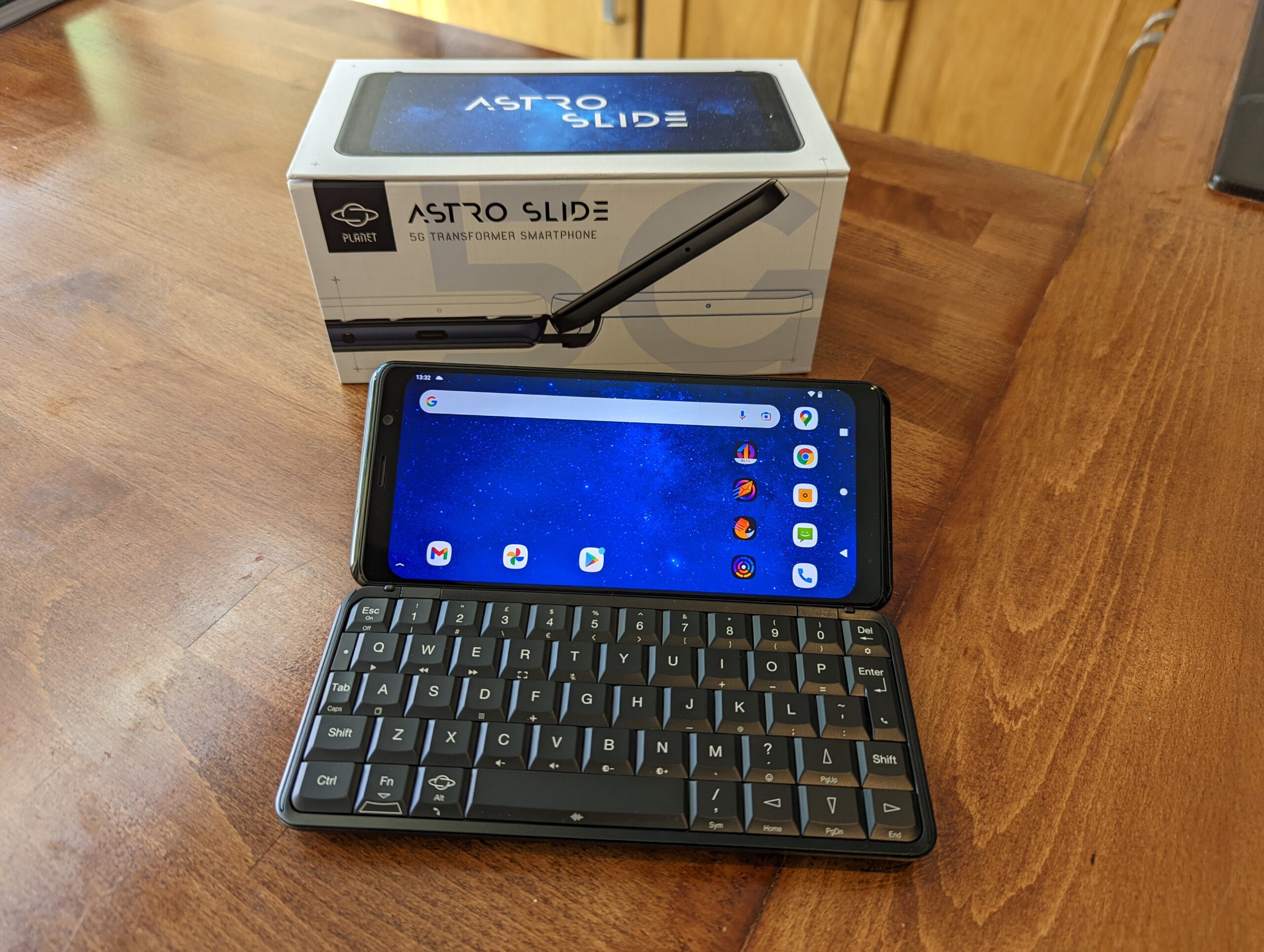 With much less nervousness felt this time, despite the pressures and delays of pandemic manufacturing restrictions and component shortages, I waited patiently and now finally have an Astro Slide in my possession.  This won’t be an in-depth review, as I’ve just the Astro for a few days but that’s long enough for my initial impressions… so, am I completely smitten, and would I have just loved it anyway, or is it actually any good?

So let’s be fair and begin with what I don’t like.  I have to admit I personally would have preferred higher-end internals.  A more modern, faster processor, Wi-Fi 6 or 6E, and a choice of storage perhaps even up to 1TB.  I do acknowledge though that it’s difficult enough to manufacture different keyboard layouts without then complicating this further with different hardware variants, something Planet discovered early on with the Wi-Fi only and 4G Gemini devices.  I also have to acknowledge that Planet Computers actually have to sell these things, and in volume, and pricing the device too high will act as too much of a deterrent for far too many people.

That aside, there are some niggles about the device that I’m not completely happy with.  The sliding mechanism for the screen is hard to operate at first, as has been borne out in other reviews.  You do get used to it, and it does get easier after a little while as you use it more, but don’t expect opening the Astro to be a one-handed affair.

I’m also slightly concerned about the four small rubber feet that sit on the bottom of the device.  They’re glued to the base and I’m wondering what might happen when they begin to fall off from repeated use or wear and tear in my pocket. 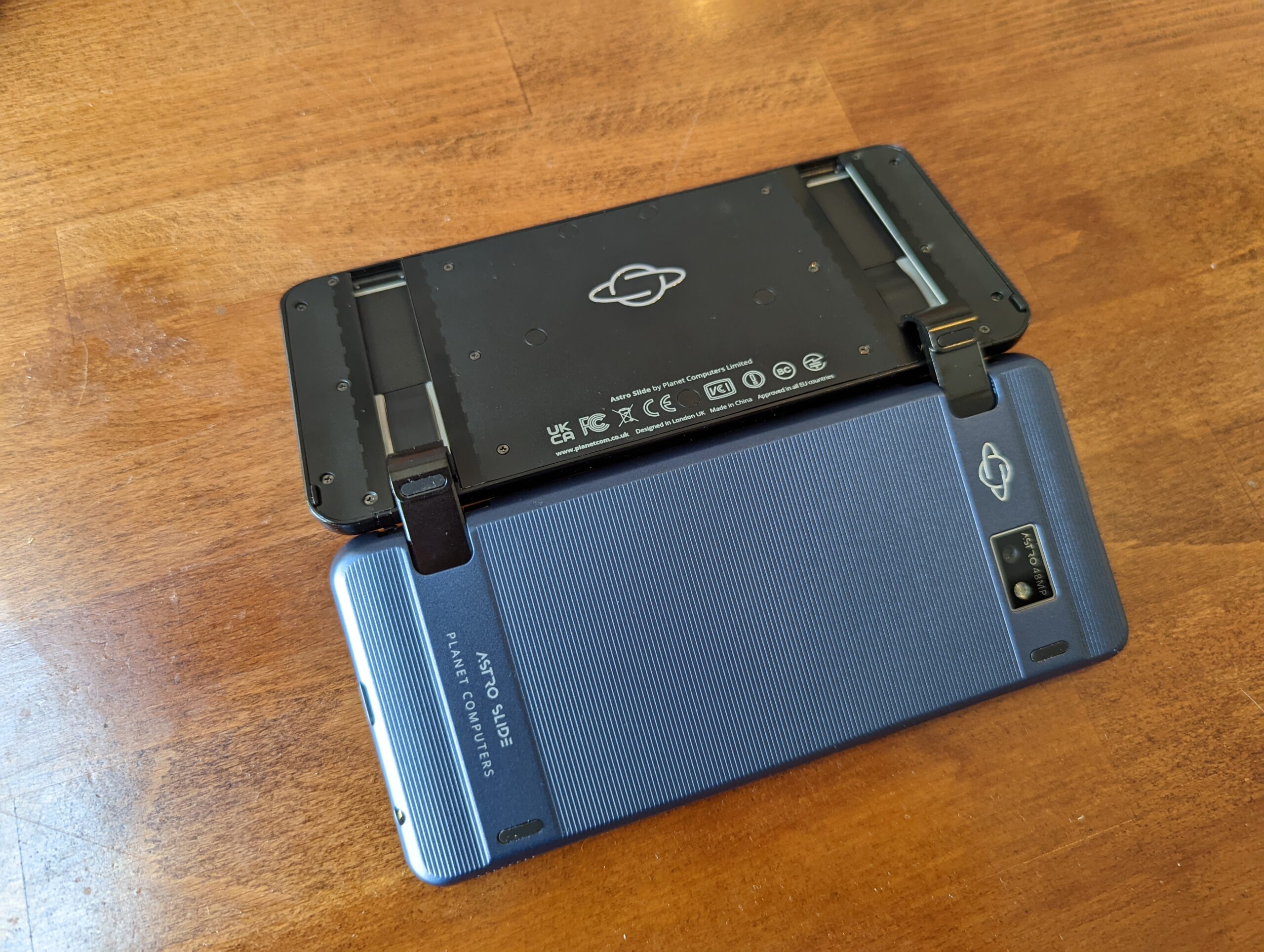 The rounded corners on the screen are also a bit large, and I would have preferred more narrow corners that didn’t cut so much of the screen off.  For my list of immediate problems though, this is it, and you can likely guess by now that I feel Planet Computers have largely nailed it with this third-generation device.

The hinge is solid, something that wasn’t always the case with the Gemini and Cosmo which sat back on it too much, placing pressure on it.  The Astro has two retractable stands the screen sits on, offering it much more support.  This in turn makes it a highly rigid device, with almost no movement and wobble whatsoever when typing or prodding the screen.

That screen also is magnificent.  When I was setting up the Astro I had it placed next to my also new Google Pixel 6 Pro, and the latter’s screen genuinely looked dull and washed out by comparison.  The keyboard, with it’s in-built backlight, is yet another improvement on previous iterations.  Riddiford keeps tweaking and revising his mechanics to improve them, and though the keys are necessarily small, they’re of a solidity and tactile feedback to almost match the Microsoft Surface Laptop Studio I’m typing this review on.

When it comes to the overall build quality I was concerned during development that the ribbed blue back would look and feel cheap and plasticky, with previous Planet devices having metal shells.  Not only was I wrong, but I was also surprised by the weight of the Astro, feeling significantly lighter than the last generation Cosmo, and slightly lighter than the Gemini.

I should also praise the SIM tray, not something often said in reviews, but with support for two separate SIM cards AND a Micro SD card, with the ability to also support an eSIM in software (replacing one of the physical SIM cards) this is a flexible travel device indeed.

I won’t talk about the camera too much, partly because I don’t really care about such things, and also because for the odd photograph I do take I bought the excellent Google Pixel 6 Pro, so I could take advantage of its amazing astro photography mode as I live in the middle of the French countryside with near zero light pollution.

For those that do care about the camera though.  If you want a really great camera on a phone, buy a Samsung Galaxy, an iPhone, or of course the Pixel 6.  You won’t find it here.  It’s a substantial improvement on previous Planet devices, with its 48MP Sony sensor, but like the rest of the hardware it’s not high-end.  That said, it can still produce good quality everyday photos, but as there’s only a single lens, you don’t get the bells and whistles that other smartphones come with. 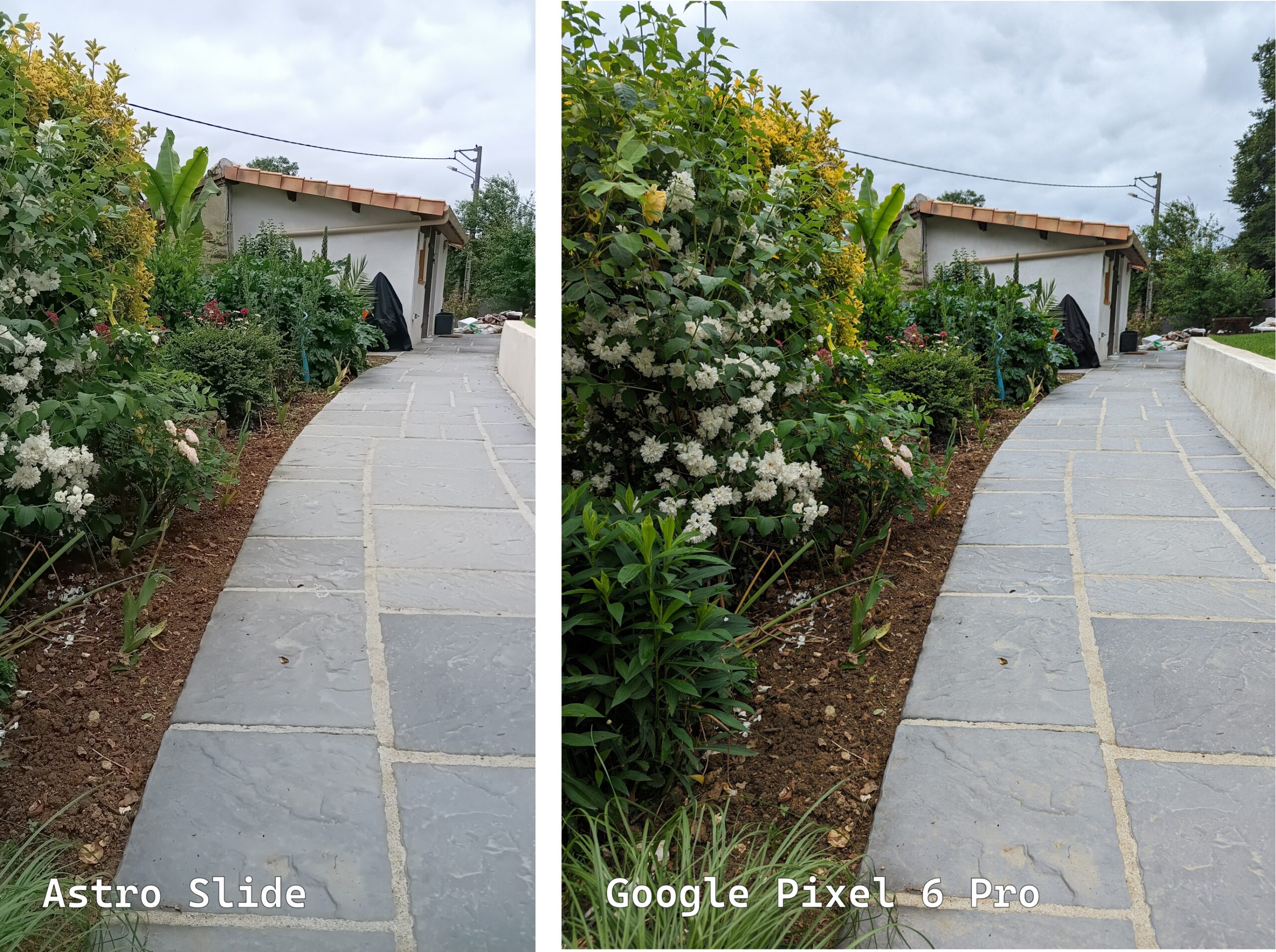 Generally, photos lack the colour pop and definition of high-end smartphones, but in my brief and very unscientific test I didn’t see any aberrations or pixilation that often occurred with the cameras in the Gemini and Cosmo.

Speaking of middle of the road, let’s talk performance.  Yes, I find the 128GB storage and 8GB RAM to be stingy by today’s standards.  I would have preferred 256GB or more, but then I would have preferred a lot of things.  In use though the Astro does not feel slow or sluggish.  Screen rotation is quick, apps open as you would expect and there’s little or no delay when you start pecking at the keyboard.  Overall, unless you really genuinely need high-end speed, you’ll be perfectly well served by the Astro. 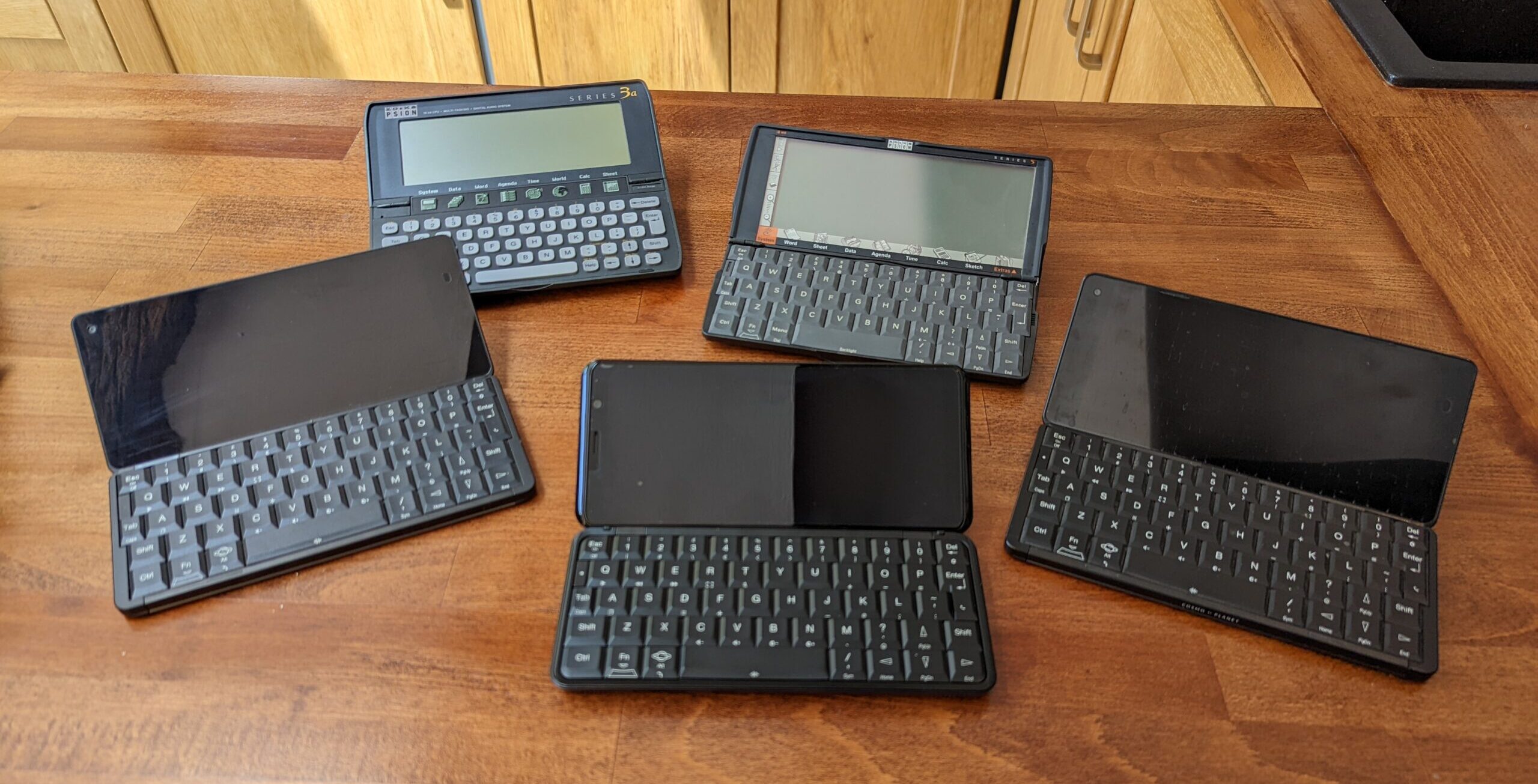 When it comes to audio, the stereo works well but there’s a distinct lack of bass.  This can leave music sounding thin with too much emphasis on the mid and high range.  I listened to both music and watched a movie.  While movies suffer the same lack of bass as music, the 6.39-inch AMOLED screen makes them look glorious, so if you’re using the Astro to watch video on the move, such as on a train or in a cramped airline seat, I would recommend a good pair of headphones, which is something that I’ll come to in a moment.

The last thing I want to highlight is the inclusion of not one but two USB-C ports which this time can both be used for charging, and I also want to cheer a proper 3.5mm headphone jack.  Like many people I still need one of these all the time, Bluetooth headphones just aren’t reliable enough for the needs I have making regular calls to friends back in the UK and around the world.  With so many devices, including the Pixel having long since dumped it I am very grateful for its inclusion here.

In summary what else can I say about the Astro Slide.  Sure it’s chunky, but it has a full mechanical keyboard, what would you expect.  As a step up from the Gemini and Cosmo though it is certainly a step up, and then some.  While the Cosmo was a generational leap from the Gemini, the Astro is to the Cosmo what the Google Pixel 6 Pro was from the Pixel 5, whereas the new model is top end, replacing its “designed as middle of the road” predecessor.

I know I’ve already said that nothing about the Astro Slide is high end, but when you have a leap this big over the previous generation of device, I’m really not sure what other words I’m supposed to use.