Twice a year Microsoft release a Feature Pack for Windows 10, these are the equivalent of Service Packs for older versions of Windows.  The difference is that where new features would come along every three or so years with a new version of Windows, and the Service Packs rolled up the security and stability updates until that next happened, Windows 10 Feature Packs roll up security and stability updates, along with new features and functionality. If you are using a PC with only a small amount of storage however you might find that these Feature Packs won’t install.  On average, a Windows 10 Feature Pack needs at least 4GB of free space on your PC in order to download and install, though some need much more space.  If you have lots of apps and games installed, or lots of files and photos on the device, you could easily find yourself without enough space. If this happens Windows Update will alert you and ask you to either free up some space by uninstalling apps and games, or removing files.  This isn’t an ideal solution however, but there is an alternative. 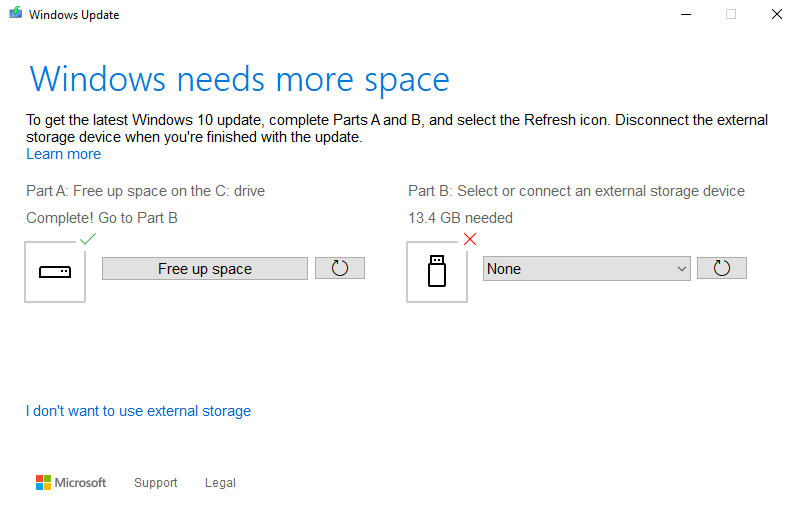 If you have a space USB Flash Drive with around 14GB of free storage on board, Windows Update can use this as temporary storage space.  The USB Flash Drive will be used as A) download space for the update, B) temporary storage while the update installs, and C) backup storage for your current copy of Windows should you want or need to uninstall the Feature Pack later.  It’s primarily because of this last use that the USB Flash Drive needs to have a lot of free space. If you are using a laptop or tablet that only has a Micro-USB port and that doesn’t have a full-size USB port, you will need what’s called an On The Go (OTG) cable.  This allows you to connect your USB Flash Drive to the PC, and they can be picked up very cheaply from websites such as Amazon, eBay, and Alibaba. Armed with a space USB Flash Drive you will now be able to install the latest Windows Feature Update.  Remember though to keep that USB Flash Drive, and don’t erase it for 30 days after the install, just in case you need to roll back the update should something go wrong with it.  If this happens, open Settings and navigate to Update & Security and then Recovery.  Here you will be able to revert to the previous version of Windows, and you will be prompted for the USB Flash Drive containing your backup.